AIGA Partners with Nonprofits in Get Out the Vote Campaigns

New York (August 13, 2020) — 2020 marks the centennial of ratification of the 19th Amendment, granting women the right to vote in 1920. It was the first legislation for women’s voting rights. Not until the passage of the Voting Rights Act in 1965 were voting rights of all women protected and enforced, and intimidation tactics progressively eliminated. AIGA, the professional association for design, is commemorating this milestone with a poster campaign empowering the women’s vote, in addition to a countdown of design challenges encouraging Get Out the Vote efforts across the nation.

This civic engagement initiative wields the power of design to motivate American citizens to register and cast their ballots in the 2020 general election, as well as their local elections. Working in collaboration with the League of Women Voters and Nonprofit VOTE, AIGA is activating its community of designers to create a collection of public art and messages that can be used to commemorate 100 years of the women’s vote and encourage and inspire all voting-age populations to exercise their civic rights. Get Out the Vote is part of AIGA’s Design for Democracy initiative.

The Get Out the Vote: Empowering the Women’s Vote poster campaign, invites AIGA members to design nonpartisan posters to commemorate 100 years of women’s voting rights. This campaign aspires to not only support voter participation, but to also serve as a backdrop for dialogue and examination of the history of voting rights and women’s fight for equality. The focus of the campaign is an online gallery of original, nonpartisan posters designed by AIGA members for printing and public distribution.

“This project was conceived in 2018—as a historic opportunity to unify and celebrate women of design while focusing their talents toward an important civic goal. While we could not have predicted what 2020 would bring, we do know that the democracy we are a part of can only work when we each speak up, and vote,” said project initiators Kelly Salchow MacArthur, Professor of Graphic Design at Michigan State University and President Emerita of AIGA Detroit; Nancy Skolos, Professor, Department of Graphic Design at Rhode Island School of Design and AIGA Medalist; and Frances Yllana, AIGA President’s Council Chair and AIGA Design for Democracy Chair.

As part of this year’s Get Out the Vote campaign, a core group of curated posters by women of design from the Empowering the Women’s Vote campaign will be on exhibit at Carnegie Mellon’s Institute for Contemporary Art (Pittsburgh, Pennsylvania); Michigan State University’s Union Art Gallery (East Lansing, Michigan); Museum of Contemporary Art San Diego (San Diego, California); The Printing Museum (Houston, Texas); the RISD Museum (Providence, Rhode Island); Theatre Squared (Fayetteville, Arkansas); among other institutions.

“For more than a century, women have played a fundamental role in shaping an inclusive and active electorate. Women have powered—and continue to power—the vote. Even as this year continues to bring unprecedented challenges to our communities and our democracy, we know that our nation is at its best when everyone has a chance to participate,” said Virginia Kase, CEO of the League of Women Voters of the United States.

“Civic engagement is part of the heart of design. Making information, especially voter information, accessible and understandable strengthens and enhances our democracy,” said AIGA Executive Director, Bennie F. Johnson. “I’m proud of the work our design community has done to celebrate 100 years of empowering women’s vote and to inspire their fellow citizens to take action in November.”

Visit VOTE411.org to find out about upcoming elections in your community, check your voter registration, and find out what’s on your local ballot. Learn more about AIGA Design for Democracy, which continues to advocate for civic engagement through voter education, registration, and access. If you would like information about absentee voting during COVID-19, Nonprofit VOTE has information along with Countdown to the Election resources. 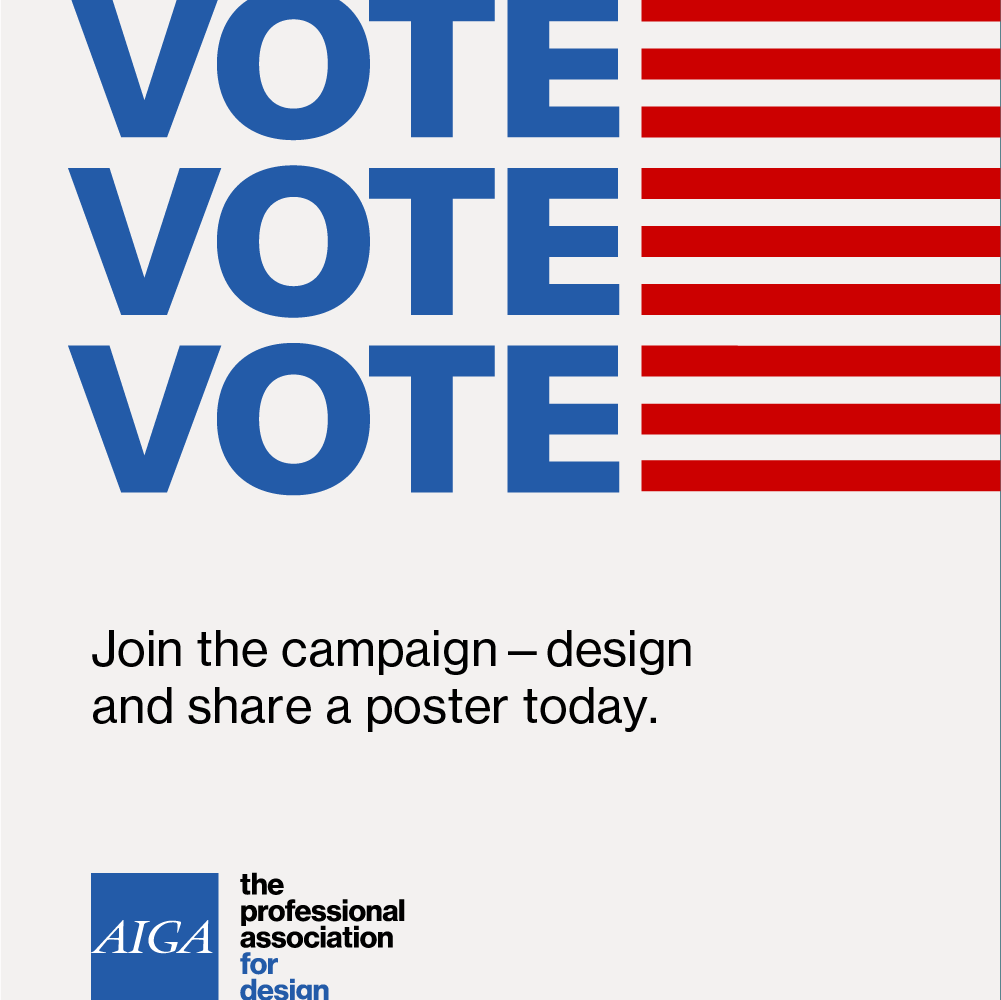 About AIGA
AIGA, the professional association for design, advances design as a professional craft, strategic advantage and vital cultural force. As the largest community of design advocates, we bring together practitioners, enthusiasts and patrons to amplify the voice of design and create the vision for a collective future. AIGA defines global standards and ethical practices, guides design education, inspires designers and the public, enhances professional development, and makes powerful tools and resources accessible to all. Learn more at aiga.org/about.

About League of Women Voters
For 100 years the League of Women Voters has worked to empower voters and defend democracy. With active Leagues in all 50 states, dedicated League members and volunteers conduct non-partisan voter registration, education, and mobilization year-round. We believe in the power of women to create a more perfect democracy. Learn more at lwv.org.

About Nonprofit VOTE
Nonprofit VOTE partners with America’s nonprofits to help the people they serve participate and vote. We are the largest source of nonpartisan resources to help nonprofits integrate voter engagement into their ongoing activities and services. Learn more at nonprofitvote.org.